Still
Your songs ring out your praises
Still
Their power floods our homes
Still
Their words tear through my heart
As the whistling troopie walks again
And my tears dilute
The blood-red wine….

The man JOHN EDMOND has certainly walked the walk of life! Along the way, he has reflected and documented in song his many human stories, be they light-hearted or tragic relating to his involvement in THE RHODESIAN BUSH WAR and his life in THE AFRICAN BUSH. He has researched and written about the life, times and characters of THE EARLY SETTLERS OF SOUTHERN AFRICA, THE GREAT TREK, ZULU WAR, FRONTIER WARS, ANGLO BOER WARS & WORLD WARS.

Among the 500 plus songs, JOHN has written. There will be something for everyone from Children, Outdoors and Wildlife enthusiasts, HISTORIANS, Aviators, pop and even love songs!

Read all about JOHN EDMOND his life story in his published autobiography – “BUSHCAT – Minstrel of the Wild” available in a hard copy or on e-books.

A site well worth investigating for the variety it offers in MUSIC!

CD of the month 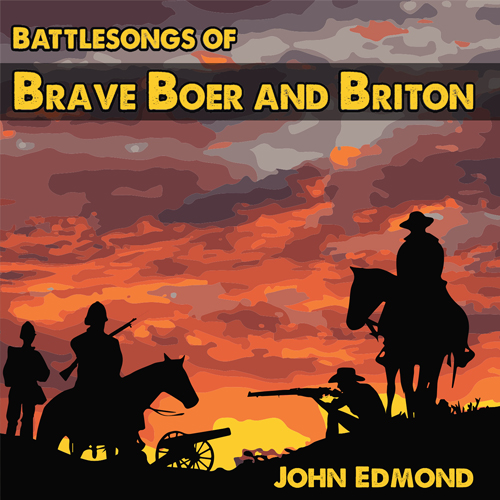 Battlesongs of Brave Boer and Briton

This album is dedicated to the bravery of Boer and Briton together with their allies from Voortrekker times of 1836 up to the Great War of 1914-1918.
The bravery of their adversaries can also not be discounted be they Zulu, Matabele or German. Most of these combatants have at one time or another fought against each other or for each other.

Angels of Vechkop portrays the bravery of Boer women and children and the Baralong tribe in a battle against the Matabele while Voortrekker Boys documents father and son heroics and Boers assisting Britons against the Zulus at Hlobane in 1879. Lieutenants Coghill and Melvill display courage at the battle of Isandlwana and Brumby-O relates the story of a valiant Australian horse and rider epitomizing the character of their New Zealand, Canadian and Colonial counterparts. On a lighter note, The Whiskey Train describes a train attack with no casualties where war is momentarily forgotten and revelry and reconciliation ensue. Cripple In the Mist tells of a disabled farmer assisting a Boer commando to evade capture by the British risking a charge of high treason. Song For Gideon sings of dashing Gideon Scheepers‘ escapades and him fearlessly facing a controversial sentence and death by firing squad. The Generals were Gentleman describes an incident which portrays the honourable and gentlemanly character of most generals of the era. Avenues of Honour shows the unstinting respect Australians and New Zealanders have for their fallen dead in all wars and how their graves are tended by former enemies on foreign soil and finally The Streets of Dellville wood lead us to the scene of one of the greatest displays of courage shown by South Africans of all creeds, colours and language groups who came together to fight for Britain against Germany in 1916.